Cinegy Multiviewer 15.2: Hail to the King 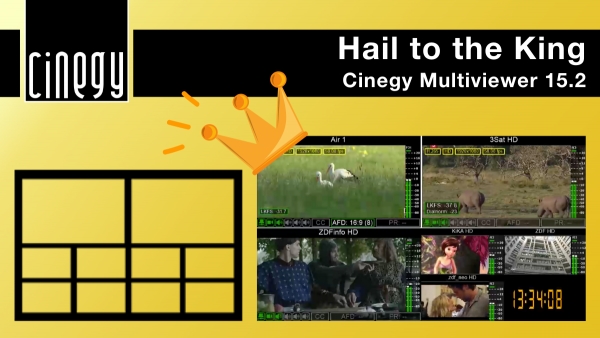 Cinegy Multiviewer 15.2: Hail to the King

Cinegy Multiviewer 15.2 is the most flexible multiviewer ever, great for on-premise and remote monitoring applications.

Streams from satellites, camera feeds, playout devices and other local or remote sources all need to be monitored. Cinegy Multiviewer displays and analyzes these signals, raising alerts for any detected signal problems. Running as a service operating on commodity IT equipment, video streams can be received over IP, eg UDP/RTP, NDI, SRT via Ethernet or using standard SDI cards.

Cinegy fully supports the SRT Alliance which is visible in its entire product range. Head of Product Management Lewis Kirkaldie said, “For years the world of broadcasting has been anticipating an open and reliable technology to move signals around. Numerous attempts have been made by different enthusiasts across the industry but none of them got closer to fulfilling the requirement than the brilliant SRT.”

Kirkaldie adds, “The new Multiviewer has a great many performance optimizations and compatibility enhancements to run even more reliably on the latest Microsoft operating systems, as well as embracing the latest and greatest technologies and protocols widely used in the industry.”