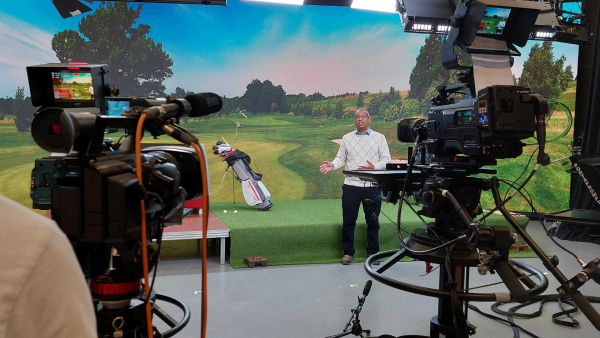 CJP Broadcast Service Solutions is close to completing a programme of installations at the University of Sunderland, providing state-of-the-art facilities for students on its media production courses. The projects include a remarkable LED volume virtual production environment as well as a green screen stage, an HD studio and outside broadcast facilities.

The University of Sunderland already has an excellent reputation for the quality of its courses in media, with its film production syllabus regarded as the best in the UK (2023 Guardian University Guide). It offers courses in performance as well as production and aims to offer a professional environment in which students can develop their skills. Courses are based in the David Puttnam Media Centre: Lord Puttnam not only gives his name but also regularly offers masterclasses and tutorials.

“Our job is first to enthuse our students with a love for production and performance, and second to ensure their career prospects are as strong as possible when they graduate,” said Nicholas Glean, senior lecturer in video and new media. “Our students can go to producers who may still be nervous around virtual and augmented reality studios and other new techniques and say ‘I’ve done this – look at my showreel’. Getting real, extended hands-on experience is hugely important.”

Over recent years, CJP has implemented four major projects for the university. First came the refurbishment of an existing green screen studio, replacing legacy equipment which had largely been donated by broadcasters with modern virtual studio systems. Recognising sustainability as a major concern, the project included installing an LED lighting rig to replace power-hungry legacy lamps.

The last stage of the project is the Virtual Production stage, featuring a 10m x 3.5m LED volume. Allied with the StarTracker Studio from Mo-Sys, which combines multiple camera tracking with powerful real-time photorealistic graphics based on the Unreal engine, this is an impressively large stage, allowing students and other users to create scenes only limited by their imaginations.

“We have worked with the University of Sunderland to achieve what they need to be the leaders in their field,” said Christopher Phillips, managing director of CJP. “But even more important, we have helped them link everything up with real-world workflows. The whole production centre mirrors the way the best modern professional centres work. Having facilities that do not compromise on quality and functionality is a really important part of preparing students for their future careers.”

The university’s Nicholas Glean added “Thanks to CJP, we are the first to be able to offer courses on virtual and augmented production in our own facilities, aimed at film and television. Working together, we have created a working and teaching environment which is roundly integrated: these are not isolated technologies, but all directed to production. During the process, the team at CJP has opened the door for our staff and students to meet other people and vendors in the industry, expanding our contacts to enrich our offering and extend our outreach into the community locally, nationally and globally.”

The various projects have now been installed and are in use, with the final integrations becoming available to students at the beginning of 2023.