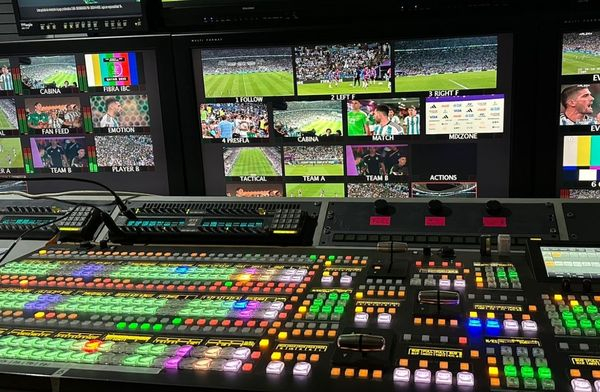 While the match content is provided by the host broadcast organisation, at major international sporting events like the football competition in Qatar, many major broadcasters need on-location production facilities to compile their own coverage. For broadcasters in Europe, Latin America and Asia, these facilities rely on production technology from FOR-A.

Some of these temporary studios are built on flyaway kits; others are using outside broadcast trucks from Gulf providers. Media Mania is providing a truck built around the FOR-A HVSー2000 3 M/E and 2 M/E production switchers, together with FOR-A routing and multiviewers. The Cubic Media compact outside broadcast units are equipped with the FOR-A HVS-490 switcher which provides powerful functionality in a very compact form factor. All are capable of providing a complete 4K Ultra HD workflow.

Other providers active in Qatar include Pro TV, which is providing studio facilities for Argentina, and Wise Concepts, which has both flyaway kits and an outside broadcast truck on site. Both have architectures including the HVS-2000 production switcher, along with multiviewers, routers and signal processing from FOR-A. As well as covering the studio facilities for a broadcaster from the Kingdom of Saudi Arabia, Cubic Media is also providing all the video facilities for the Saudi fan zone. Major Gulf broadcasters have invested in new FOR-A switchers, including the HVS-6000 native 4K production switcher designed for major Ultra HD events.

Mohammed Abu Ziyadeh, FOR-A, regional manager for the Middle East and Africa and based in Dubai, said “Everyone around the world shares the host broadcast feed of the matches, but they all want to add their own style and flavour, with the presenters and experts familiar in their home markets adding news and analysis of the action.

“To do that, many are building temporary studios around Qatar to house their local productions,” he explained. “FOR-A production switchers, routers and video infrastructure products are ideal for this sort of application, because they pack all the facilities you need into an intuitive and compact design. We are excited that football fans from Argentina to China are enjoying the spectacle via FOR-A technology.”