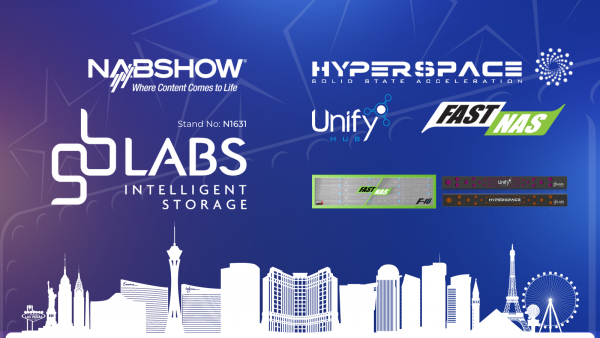 GB Labs will launch HyperSpace Generation 3 at NAB Show 2022, bringing significant enhancements to performance, functionality and environmental impact. The latest version of FastNAS (Generation 2), along with the new Unify Hub data management system, will make their NAB debut and visitors to the show will also have access to a range of GB Labs’ other intelligent storage technology such as Cloak DR, Mosaic and the latest CORE.4. GB Labs will highlight its ability to support on-premise, cloud-based and hybrid workflows.

The new HyperSpace Generation 3 delivers double the performance of the previous version, giving users access to the fastest data rates on the market when combined with GB Labs SPACE and SPACE+. GB Labs has taken its deep understanding of production workflows to create intelligent software and hardware enhancements to the underlying HyperSpace engine. The addition of new, predictive capability brings greater efficiency to fast-paced and often chaotic environments.

Launched earlier this year and making its debut at NAB is FastNAS Generation 2, which now delivers a 1000% boost in capability, with up to 4GBytes/sec real deliverable network performance. The system is up to ten times as quick for mixed tasks compared to the previous generation, delivering massive efficiencies. Today’s workflows typically require an effective multi-tasking storage with fast simultaneous read and write data rates and FastNAS Generation 2 easily meets these needs.

Visitors to the show will be able to see the new Unify Hub platform in action for the first time since its launch in September 2021. Designed for scenarios that combine on-premise and cloud content, this solution is available as a standalone solution or as a software upgrade to existing GB Labs appliances. Unify Hub empowers remote production while maintaining data integrity and security, managing storage – on site or in the cloud, from GB Labs or from other vendors – to create an ultra-productive environment which is simple and fast.

Dominic Harland, CEO and CTO, GB Labs commented: “At GB Labs we are driven by creating solutions that support the real-world needs of our customers, allowing them to focus on the job of creating amazing content. We are excited to show our latest innovations to customers in person at NAB Show after a long hiatus. We are also delighted to be working in close collaboration with technology partners such as Wasabi and Archiware to give customers even better performance across their creative workflows.”