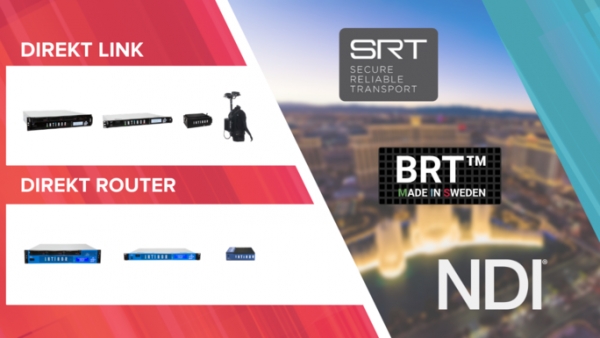 NAB 2020, April 19-22, NDI® Central Pavilion, Booth SL4711: Intinor, the leading developer of products and solutions for high quality video over the internet, will attend NAB2020 (Las Vegas Convention Center, 19 – 22 April) to showcase its uniquely powerful solutions to both combine as many as eight individual video feeds, and stream them synchronously across multiple internet paths. A strong supporter of NDI, Intinor will be co-exhibiting with NewTek on booth SL4711.

The Intinor solution creates a coherent video path over the public internet, using broadband (ethernet or Wifi), cellular (3G, 4G LTE or 5G) and Ka-band satellite as required to achieve the necessary bandwidth and resilience. What makes its solution unique is the use of forward error correction and ARQ (re-sending) in Intinor’s own transport protocol BRT™. This gives the transport stream very strong protection against lost packets – causing picture disruptions and freezes – while at the same time minimising latency, particularly important in sports.

“We have tackled head on the major challenge of video over the internet: the risk of lost packets,” said Roland Axelsson, CEO at Intinor. “IP is designed to get the data to the destination at all costs, however long it takes; video needs a complete new picture every 40 milliseconds. At Intinor, we have created BRT™ to virtually eliminate lost packets – and therefore picture and sound disruption – with minimal latency and minimal additional data overhead. The results are remarkable.”

The Intinor solution is primarily software, but the company offers a hardware product, Heimdall, which incorporates eight 3G or 4G modems in a 1U rack cabinet, which along with an Intinor Direkt router can multiplex up to eight camera feeds with associated audio into a single stream, which is then transmitted over multiple bonded networks for delivery to a central production base.

The Direkt series is fully NDI compliant, so sits transparently in an NDI architecture. To create an “all-IP-infrastructure” we are always looking to add more transport protocols to our mix. The latest additions are RTSP-pull and full SRT support.

“We have proven applications of our technology around the world, including with some of the major eSports players,” said Axlesson. “This is an excellent prospect for all media enterprises, from news to sports, looking to reduce its environmental footprint through remote production.”

Intinor products and solutions can be found on the NewTek booth at NAB2020, SL4711. It can also be seen at the pre-NAB event organised by the distributor JB&A, to be held in the Sahara Hotel on Friday and Saturday, 17 – 18 April.