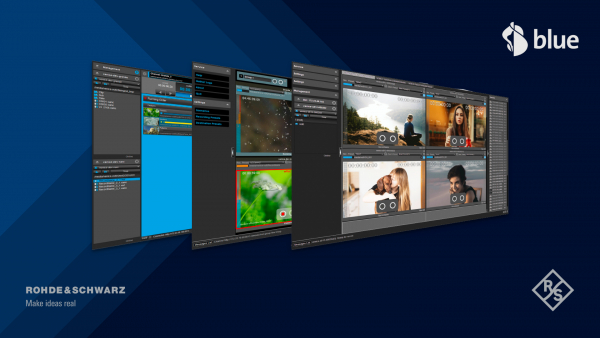 Rohde & Schwarz, a global leader in broadcast media technologies, has today announced the deployment of its high-performance intelligent storage network, as well as its media servers for content preparation at Swiss broadcaster blue. Reliability, redundancy, small form factor and easy setup were key factors in the decision to choose R&S®VENICE and R&S®SpycerNode for the project. Futureproofing and scalability were also important considerations, allowing blue to migrate from today’s 1080/25i to 50p to 4k and HDR/Ultra HD with outputs already configured for Ultra HD.

blue is a popular subscription service, based in Switzerland, offering movie and entertainment content, alongside a popular sport service. The company holds rights to top quality events, including the premier football leagues from around Europe, such as the highly popular UEFA Champions League.

Seeking to upgrade its ingest and studio platforms, blue recognised that to serve the needs of sports viewers, high availability and redundancy were critical. To enable the smooth turnaround that is central to its operations, blue also needed the capability of editing content as it arrives, for example to create highlights packages for half-time reviews. Similarly, the time pressures mean that it is vital for playlists and clips to be ready for immediate playout. Since rack space was limited, it was necessary to design the highly redundant and small form factor system in a way that was convenient to use and eliminate any complex set up processes.

To meet its current and future needs, blue has installed an extensive storage and preparation network. At its heart are seven R&S®VENICE S8s along with mirrored storage on two R&S®SpycerNode 5u84 units. Each VENICE device is capable of ingesting, transmitting or transforming eight HD or two Ultra HD signals simultaneously, for a total of 56 concurrent HD streams. This includes the ability to edit in place and playout while ingesting. The new set-up achieves all this in just 34 units of rack space, including IP switches and panels – a far smaller footprint than other systems.

“blue has invested heavily in sports rights, and we need to be sure our assets are carefully managed, archived and preserved,” said Daniel Meyer, Project Leader for blue. “Rohde & Schwarz is a long-time trusted company, and the combined VENICE/SpycerNode solution is flexible, secure and cost-effective. The company was also able to guarantee us an SLA for at least seven years, so we know we have an effective platform on which we can build our future growth.”

The two fully populated SpycerNode devices provide security through redundancy, ensuring there is no single point of failure anywhere in the content management system. R&S provides industry-leading resilience through erasure coding and a declustered array as well as hardware redundancy.

Monitoring is by VENICE View, with dynamically assigned sources to ensure operators are always aware of content flows. The integrated tools within VENICE allow operators to create sub-clips, trim material, and transwrap files without generation loss. For situations when craft editing is required, Adobe Premiere can begin editing work as files are being ingested or played out by VENICE – this ‘work-while’ function enables faster production workflows by allowing work to begin the moment file ingest begins.

“We are proud that blue has recognised the determination in our design of VENICE and SpycerNode to provide non-stop, highly resilient, mission-critical storage,” said Jörg Fries, vice president broadcast, amplifier and media solutions at Rohde & Schwarz. “This is just the sort of application we envisaged for the technology, providing seamless operational efficiency today with the possibility of scaling in the future, not just in the number of channels, editors and processes supported, but in allowing a move to higher resolutions as the blue audience demands it.”

The system was implemented by Jordi AG, Rohde & Schwarz’s systems integration partner in Switzerland. Together, the two companies designed, installed, tested and commissioned the system in the first months of 2021, while maintaining social distancing and other protective practices for all staff involved.