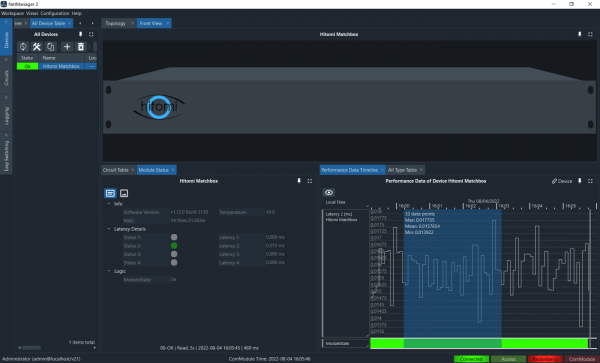 Hitomi, developer of the powerful MatchBox tools for lip-sync and latency measurement, will demonstrate its integration with VIDI NMS at IBC2022 (RAI Amsterdam, 9 – 12 September, stand 10.A42). The VIDI integration is the first time that a network management system has incorporated both latency measurement and correction into its single common user interface.

Hitomi MatchBox is a widely used platform to measure live broadcast synchronisation. At the point of origination the generator creates a unique test signal on video and up to 16 audio channels, and at the destination the companion analyser measures the incoming signals and determines precisely the delays in each path.

“We have been using Hitomi on projects, and in our labs, for many years,” said Bernd Meinl, Sales Director at VIDI. “We really appreciate the simple and precise way it measures and presents latency and lip-sync. It made sense to integrate it into our NMS software, where at a single touch the operator can check delays across large numbers of feeds and correct them to pull all the sources into line. VIDI NMS is the first such system to provide this integration, and it is another huge boost for those establishing and operating large video networks.”

VIDI NMS is a vendor-agnostic network management system, used for permanent and events networks worldwide. The software, with its graphical view of the network and its performance, was originally developed to support in-house contracts but is now available as a product, to provide the same advantages of simple, unified control.

“We have seen MatchBox used on some of the world’s largest sports events thanks to VIDI,” said Russell Johnson, director of Hitomi Broadcast. “We are excited that they have taken our partnership a stage further by integrating it into the VIDI NMS, making lip-sync and latency a one-touch operation, saving yet more time in delivering perfectly synchronised signals over any distance, any carrier and any number of feeds.”