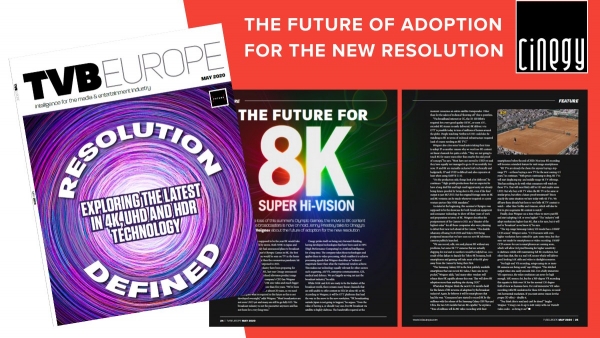 By Jenny Priestley | TVBEurope | May 2020 Edition

With the loss of this summer’s Olympic Games, the move to 8K content for some broadcasters is now on hold. Jenny Priestley talks to Cinegy’s Jan Weigner about the future of adoption for the new resolution

2020 was supposed to be the year 8K would take the world by storm. Both NHK in Japan and RAI in Italy had announced plans to broadcast this summer’s Olympic Games in 8K, the first time the new resolution would be seen on TV in the home - at least in Europe. But then the coronavirus pandemic hitand the Games were postponed to 2021.

While some in the industry have been preparing for the gradual adoption of 8K, last year Cinegy announced that its entire software-defined television product range is 8K capable. In fact, the company’s CEO Jan Weigner says it’s been working with 8K size video and much bigger resolution in earnest for more than five years. “We’ve been developing video codecs for almost 20 years, so we need to anticipate what is required in the future as this is not developed overnight,” adds Weigner. “Most broadcasters are not even UHD yet and many are still to go fully HD. The broadcast industry is not the pacesetter anymore and has not been for a very long time.

Cinegy prides itself on being very forward-thinking, having developed technologies that have been used in HPC (High Performance Computing) or Artificial Intelligence for a long time. The company takes those technologies and applies them to video processing, which enables it to achieve processing speeds that Weigner describes as “orders of magnitude faster than what the traditional vendors achieve. This makes our technology equally relevant for other sectors such as gaming, AR/VR, enterprise communication, GIS, medical and defence. We are happily serving not just the broadcast industry,” he adds.

While NHK and RAI are ready to be the leaders of the broadcast world, there remain many linear channels that are still unable to offer content in HD, let alone 4K or 8K. According to Weigner, it will be OTT platforms that lead the way in the move to the new resolution. “8K broadcasting outside Japan is not going to happen,” he argues. “Even the value of having a, or should I say one, live 8K broadcast via satellite is highly dubious. The bandwidth required at the moment consumes an entire satellite transponder. Other than for the sakes of technical ‘showing off ’ this is pointless.

“Via broadband internet or 5G, the 50-100 Mbit/s required for a very good quality HEVC, or soon AV1, encoded 8K stream is easily delivered. 8K delivery via OTT is possible today to tens of millions of homes around the globe. People watching Netflix in UHD could also be watching in 8K in terms of technical infrastructure required (and of course needing an 8K TV).”

Weigner also cites some broadcasters taking their time to adopt IP as another reason why we won’t see 8K content on linear channels for quite a while. “They are not going to touch 8K for many years other than maybe the odd proofof-concept,” he says. “Most have not moved to UHD yet and they have equally not managed to go to IP successfully. For now, IP and 8K are mutually exclusive both technically and budgetarily. IP and UHD is difficult and also expensive at least when using SMPTE 2110.

“On the production side, things look a bit different,” he continues. “High-profile productions that are expected to have a long shelf life and high resell opportunity are already being future-proofed by being shot in 8K, even if the final output is just 4K/UHD. But the original footage exists in 8K and 8K versions can be made whenever required or a joint venture partner like NHK mandates.

As stated at the beginning, this summer’s Olympics was supposed to be the showcase for both broadcast equipment and consumer technology to show off their years of work and preparation in terms of 8K. Weigner describes the postponement of the Games to 2021 as a “disaster of the highest order” for all those companies who were planning to debut their new tech ahead of the Games. “The double whammy of losing NAB 2020 and Tokyo 2020 being postponed means that we have seen no new 8K television cameras publicly launched.

“We can record, edit, mix and playout 8K without any problems, but some 8K TV cameras that are actually shipping for real and in numbers would be helpful too. As a result of this failure to launch the Tokyo 8K bonanza, both smartphones and gaming will take most of the 8K glory away from the Games by being there first.

“The Samsung Galaxy S20 is the first publicly available smartphone that can record 8K video, I have one in my pocket,” Weigner adds, “and many other vendors will release their 8K capable phones this year. This will drive 8K adoption more than anything else during 2020.”

What does Weigner think the next 12-24 months hold for the future of 8K in terms of adoption by the broadcast industry? Again, he believes it will be smartphones that lead the way. “Consumers have started to record 8K by the millions with the release of the Samsung Galaxy S20 Plus und Ultra, the two S20 models that are 8K capable,” he explains. “Tens of millions will do 8K video recording with their smartphones before the end of 2020. Next year 8K recording will become a standard feature for mid-range smartphones.

“8K TVs are already the choice for anyone buying a toprange TV – or those buying a new TV for the next coming 4-5 years,” he continues. “With prices continuing to drop, 8K TVs will start displacing top- and middle-range 4K TV offerings. This has nothing to do with what consumers will watch on those TVs. That will most likely still be HD and maybe some UHD. But why buy a 4K TV when the 8K TV is the same or similar price, but offers a future-proof investment? This is exactly the same situation we have today with 4K TVs. We all have them already but there is very little 4K TV content to watch – other than Netflix and Amazon, which will also be first to give us genuine 8K content to watch.”

Finally, does Weigner see a time when we move past 8K and start adopting 16K or even higher? “The ‘industry’ will adopt resolutions higher than 8K, that is for sure, but it will not be ‘broadcast’ as we know it,” he says.

“The top-range Samsung Galaxy S20 model has a 108MP CCD sensor,” Weigner notes. “CCD sensors with even higher resolution have existed for quite some time, but they were not made for smartphones or video recording. 150MP CCD sensors for use in smartphones are coming soon, which will allow 2x2 pixel binning for higher sensitivity in darkness whilst still maintaining full 8K resolution, but other than that, this is a real 16K sensor which will deliver good-looking 16K stills and video in daylight scenarios.

“For high-end VR recording, setups using six or more 8K cameras are being used,” says Weigner. “The stitched output video size easily exceeds 16K. For a fully immersive VR experience, the video resolution can never be high enough. 16K seems a lot, but for a 360-degree VR recording this equates to little over 5K for the normal 120-degree field of view we humans have. For real immersive VR video recording with 8K resolution for these 120-degrees, we need 24K horizontal resolution. If you want stereo vision for the proper 3D effect – double it.

“You think this is mad and can’t be done?” laughs Weigner. “Cinegy can do up to 64K today with our Daniel2 video codec - so bring it on!”