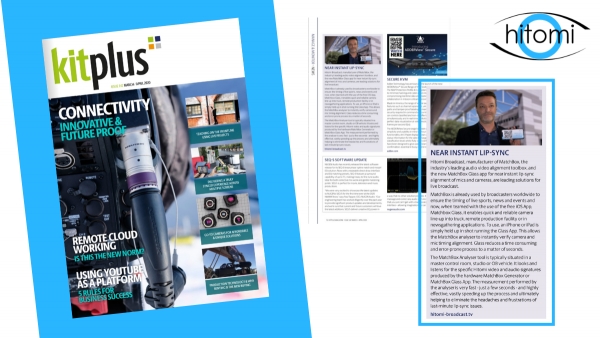 By Jennie Priestley | TVBEurope | Published in the Jan/Feb 2020 Edition

When broadcasting a huge awards show to an international audience it’s imperative to make sure both sound and vision are in sync. It’s even more important when the show features numerous musical acts because fans will be quick to take to social media if there are any issues with their favourite performers.

In order to ensure fans around the world got the best possible experience while watching November’s MTV EMA Awards in Seville, Spain, Viacom employed Hitomi Broadcast’s Glass and Matchbox products to ensure perfect synchronisation between the microphones and cameras at the venue, and in the international feeds. “The biggest crime in broadcast is to have your audio out of sync with your video,” explains Matt Okotie, lead engineer, Viacom International Media Networks. “We time that down to milliseconds or point zero of a millisecond. Hitomi gave us a box that could read that signal, and basically send the signal with picture from London to anywhere in the world.”

The Matchbox software gives the user a reading of how much the audio is out of sync with the video, and enables them to line it back up on all their equipment. “With global distribution on an event such as the MTV EMAs, we were sending eight different feeds, HD, UHD, mains and backups back to London, and that’s globally distributed into the US, Latin America, Asia Pac, all over Russia, all over Europe,” explains Okotie. “You need to make sure everything’s in sync every step of the chain so we use Hitomi boxes globally to sync up everybody together.”

Having used Matchbox previously, the EMAs was the first time Viacom had used Hitomi’s newest product, Glass. “We initially went to demonstrate our Matchbox product to Matt Okotie at the Viacom offices in Camden, North London. As a result, he hired a unit for the 2018 MTV EMA event,” explains Russell Johnson, Hitomi’s managing director. “In September 2019, we showed him Glass on our stand at IBC and he said he would love to field trial it for us. We had to say yes to such a great opportunity!”

“The one bit that was missing previously was linking the camera to the OB compound sync,” adds Okotie. “With Glass you hold up an iPad and then get sync from multiple cameras back to the OB compound. We had 14 cameras at the main venue in Seville and then multiple cameras around the other venues and on the red carpet. We needed to make sure all the cameras were synced so that as you cut to each one, they’re all in sync as well.”

Of course, when you’re sending a feed around the world, there must be latency issues depending on where it’s going. It’s likely to arrive in Manchester faster than it will in Moscow or Manhattan. How does the Viacom production team work around that? “We measure it at each point,” explains Okotie. ‘We measure the latency from Seville to London, London to New York. From London we transmit to everywhere, so we do every section individually.” To help with the synchronisation, Viacom used multiple Hitomi Matchboxes. “We had one in Seville, one in London, India and New York,” says Okotie. “For UHD distribution we used the Hitomi technology and then we sort of down-converted it from UHD and distributed it as HD to countries that are using older kit. We also use the Hitomi boxes internally in our London studios quite a lot to sync up all our cameras there. The boxes work on any broadcast that need sync.”

According to Okotie, the Hitomi products are “the most accurate on the market” and Viacom is already looking at using the kit on more events. “We’re also looking to invest across our main data centres in New York and London over the next couple of quarters.