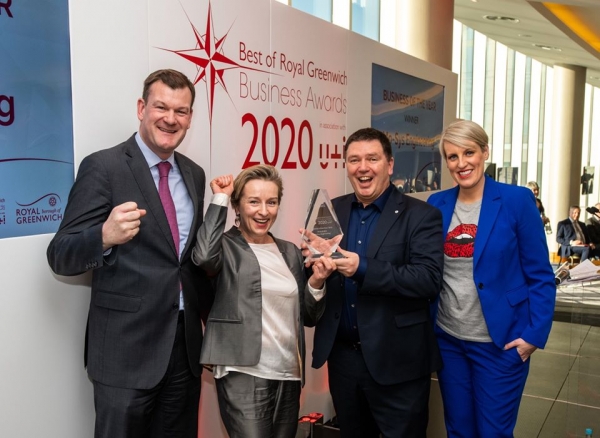 On Friday 6th March Mo-Sys were thrilled to be named Business of the Year at the Best of Royal Greenwich Business Awards 2020. Hosted by TV presenter and journalist Steph McGovern at the InterContinental Hotel, the awards ceremony recognises the achievements of businesses across the borough. In addition, Mo-Sys also came out victorious in the Made in Greenwich category, an award which celebrates the talent and creativity of local innovators who are bringing exciting products, good and services to market.

For those that don’t know who we are or what we do, we are based in Morden Wharf on the Greenwich Peninsula and we manufacture sophisticated camera technology for television broadcasts and feature films.

If you have watched the BBC’s Match of the Day programme this season or if you’ve seen any of the recent General Election nights on BBC or Sky, then you would have experienced our technology in action. Our specialist equipment which gives precise camera tracking data, broadcasters can add informational graphics and immersive virtual sets into their productions, giving audiences a more engaging and satisfying viewing experience.

Since relocating to Greenwich in 2015, we’ve been on a mission to deliver the best technology that will transform the way films, TV series and broadcasts are made. Now, our innovations are making greenscreen shooting cheaper and simpler than ever before, in turn giving smaller companies the same opportunities as the big players that have long since dominated both the film and broadcast industries.

“After being shortlisted in the 2019 Awards but unfortunately missing out in the Micro to Small Business Award category to the well-deserved BeGenio – we were delighted to be named winners in the Made in Greenwich category and receiving the Business of the Year award.”

“It’s very easy to get swept up in day to day business activity but entering the business awards was a great opportunity to take a step back and reflect on our achievements over the last year. It’s even more fantastic to be recognised for the work we do and to come out victorious. Thank you to everyone all of the judges and the council for recognises for our innovation and all of the hard work we do”